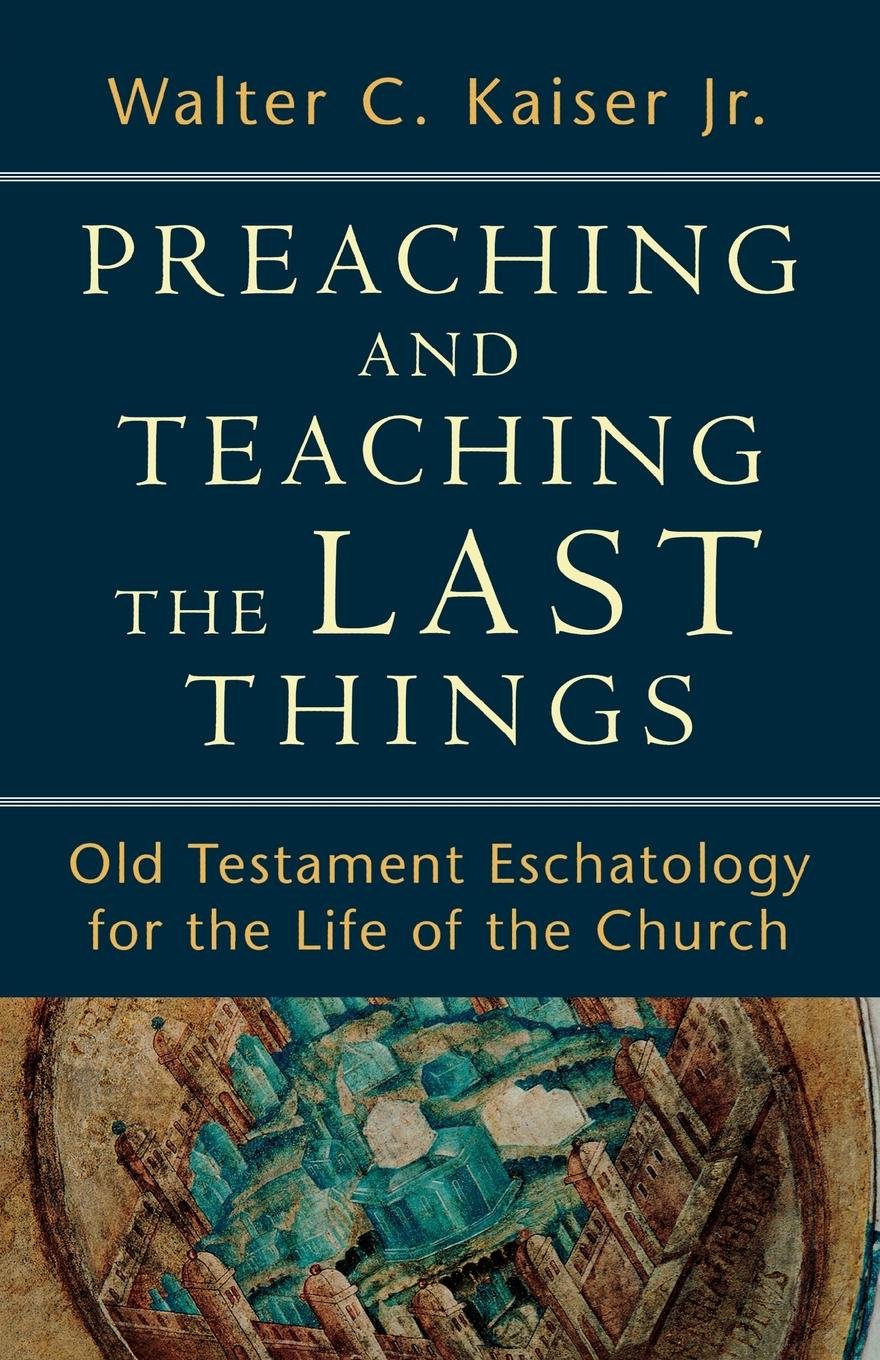 I can’t imagine preaching or teaching Zechariah or Ezekiel 38-39 without this volume on my desk.  Walter Kaiser starts with the “promise plan of God” and shows how God’s promises to Israel must be that in order to show his fidelity to the church.

Each passage deals with a key text of OT eschatology.  Even if you don’t share Kaiser’s premillennialism, you will likely be dealing with the same texts.  Further, his textual comments are invaluable. Each section also has a homiletical outline, similar to what we saw in his Preaching and Teaching the Old Testament.

A word of caution: Kaiser’s outlines function better for teaching series instead of single sermons.  You won’t be able to preach on Ezekiel 38-39 in one morning.

The “latter days” or “day of the Lord’….came to be connected with that group of events and times associated with Yahweh’s coming judgment and deliverance” (Kaiser xiv). Kaiser does briefly treat the NT’s Two-Age doctrine, and while I endorse Kaiser’s premillennialism, I wish he would have interacted with Riddlebarger’s claim that there is no room for a millennial reign in either of the two ages.

Key argument: God made a unilateral covenant with Abraham and David.  This covenant includes God’s promise to bring Israel back into the land, which Kaiser powerfully develops in his treatment of Zech. 10.

The promise-plan of God is his promise of a Seed, a land, and the gospel (Gen. 12:2-4). Kaiser begins to really develop this in his text on Ezekiel 37, where the “bones” are “the whole house of Israel” (31).  Even more, the “promise made to the church would be without any firm attachment to any past history and to what God had planned to provide for all who believed. If the church had not been rooted in the concrete promises of the calling of a nation and the gift of a land, it too would float in the air without any grounding in the past” (39).

We will now take some time to see his outline of Zech. 10, and in this Kaiser shows us how to do a homiletical outline.

Background note: Zech. 10 speaks of another return to the land. That’s interesting.  This was written after they had returned from Babylon. In other words, there was no NT fulfillment.

The Third Return of Israel to the Land of Promise

Text: Zech. 10:2-12
Focal Point: Verses 9-10.
Homiletical keyword: Contrasts
Interrogative: What? (What are the contrasts between the corrupted leaders of false shepherds and the good leaders and true shepherds of the people?)
Teaching aim: To show how Israel has suffered not only for her own sin, but from the corrupted leadership she has had in deference to the compassionate leadership God plans to give her in the last days as he brings Israel back to the land of his promise for the third time.

The Extent of Messiah’s Rule

The Antiochene school “established the model of theoria….lining up what happened in the past with an analogous event in the future, so there could be said to be one in meaning, even though they were two distant fulfillments” (65). While there are some difficulties here, it is infinitely superior to allegorical or “spiritual” exegesis, which is no exegesis at all.

Kaiser discusses some interesting, but technical issues with the canonical placement of this psalm, which are beyond the scope here but definitely worth your time (66-67).  In the psalm itself, the psalmists language of “as long as the sun/moon” echo the Davidic covenant (and later the New Covenant of Jeremiah, promised to the House of Israel and Judah).

The day of the Lord is never conceived as a 24 hour period, but rather a length of time associated with the Second Advent (75). This period is marked off by Daniel as a time of “seventy weeks.”

Kaiser does connect on one level “the last days” with the events at Pentecost (Acts 2:17). “The outpouring was an initial fulfillment of those ‘last days’” (79).  However, the Pentecostal events cannot be equated with “that great and dreadful day of the Lord” (82). The same language was used by Jesus in the Olivet Discourse, so unless we want to go full preterist and say Pentecost fulfilled the Olivet Discourse, we have to allow for a future referent.

Key argument: two events in history and eschatology are interrelated: Israel’s return to the land and the Lord’s second advent (82).

Text: Ezekiel 38:1-39:21
Title: “Gog and Magog’s War Against Israel”
Focal point: Ezek. 38:16
Homiletical keyword: predictions
Interrogative: What? (What are the predictions of what God is going to do as he puts a huge stop to the otherwise steady stream of attacks on the nation of Israel over the course of history?)
Teaching aim: To demonstrate that God, for his own name’s sake, will sensationally rescue Israel when all other sources of help fail.

The 70 Weeks of Daniel

This section is hard. It might even be a lexical nightmare.  Here goes nothing. Here is the problem, while the “seventy sevens,” understood as years, makes sense, do we divide the sevens into two sections or three?   Do the six purposes “run only up to Christ’s first coming or do they run up to his second coming” (106)?

Kaiser, however, divides it into three parts, understanding there to be a Hebrew athnak accent mark from the Masoretes (107).

“Verse 25 mentions a segment of seven sevens/weeks and another segment of sixty-two sevens/weeks.  The sixty two sevens is mentioned again in verse 26; verse 27 speaks of one seven/week along with a middle to that [one] seven” (108).

It might not matter too much for any particular eschatological system.  Unless you are a heretical preterist, everyone posits some “gap” in it.

The Battle of Armageddon

Kaiser suggests that Zech. 12 and 14 refer to the same event.  I’m not so sure. Moving on, if we allegorize Zech 14 to refer to “the church,” which refers back to the same entity in 13:8, then we have to posit that at the end ⅔ of the church will be annihilated (134).  Best to take it in a normal sense.

Preparing for God’s Glorious Consummation of History at Armageddon

Text: Zech. 14:1-21
Focal Point: Verse 19
Homiletical keyword: Events
Interrogative: What? (What events will God use to conclude human history?)
Teaching aim: To show that the battle of Armageddon is earth’s final attempt to overthrow the kingdom of God and the people of God, as set forth in the promise-plan of God