Review of On God and Man: The Theological Poetry of St Gregory of Nazianzus (SVS Press) 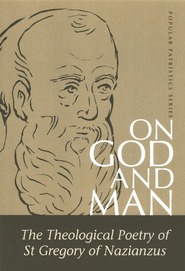 {1} Some have compared this work to Augustine’s Confessions, but that’s misleading. True, Gregory does open his soul to outsiders, and the literary skill is magnificent, but it isn’t nearly as introspective as Augustine’s work. But echoes certainly remain. One theme in this book, similar to that of Ecclesiastes, is the evanescence of life. Gregory ties this with our materiality. Yes, matter is good and created good, but matter’s fallen mode is one of change and flux.

{3} Of particular importance are Gregory’s stirring accounts of the human soul. The soul has mind and reason (Gregory 82). It is superior to flesh (96). Indeed, it is the very breath of God (lit. “the efflux of the divine Mind, 103 passim).

{4} As we would expect with St Gregory, he displays a high and holy view of God. The Father is “Mind” and the Son is the Father’s intellect (53, 38). The Son is the archetype’s image. Echoing some Neo-Platonic themes, man, indeed creation, proceeds from God and returns to God (157). While he rejects the eternality of creation, nonetheless creation was an idea in the mind of God–and God’s ideas are eternal per the doctrine of simplicity.

{6} This work ends with one of Gregory’s most famous poems, including the prophetic dream he had of the Two Virgins. (Incidentally, if you are a cessationist then you will have problems with Gregory).

This work is magnificent. In many ways it is better than “On God and Christ.” Because it is poetry, it is more accessible (if occasionally incomplete in thought). Some lines, even in translation, are simply sublime.

One thought on “On God and Man”