The second book in the Nephilim Chronicles is a sort of prequel.  Here are my thoughts, both what is good about the book and what needs to be developed.

His scope and vision is awe-inspiring.   He has laid the foundation for a biblical epic.  Granted, I don’t think it will get there, but still.  It’s a start.

He does a decent job in character development.  Not quite as sharp and profound as how he treated Noah in the previous novel, but still decent and better than most.

The novel moves at a sharp pace, and he does a good job of building suspense.

Needs to be developed

The dialogue between Methuselah and Edna grated somewhat.  The rest of the dialogue was okay.

The novel also risked “preaching” a bit. I have as militant a hatred of socialism and big, yet there were passages that seemed plucked from Milton Friedman.

The series is still worth reading, aside from these points. 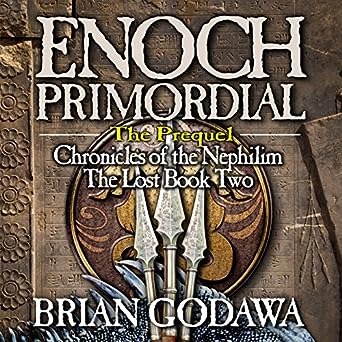 The second book in the Nephilim Chronicles is a sort of prequel.  Here are my thoughts, both what is good about the book and what needs to be developed.

His scope and vision is awe-inspiring.   He has laid the foundation for a biblical epic.  Granted, I don’t think it will get there, but still.  It’s a start.

He does a decent job in character development.  Not quite as sharp and profound as how he treated Noah in the previous novel, but still decent and better than most.

The novel moves at a sharp pace, and he does a good job of building suspense.

Needs to be developed

The dialogue between Methuselah and Edna grated somewhat.  The rest of the dialogue was okay.

The novel also risked “preaching” a bit. I have as militant a hatred of socialism and big, yet there were passages that seemed plucked from Milton Friedman.

The series is still worth reading, aside from these points.

Bauckham’s argument is that 2 Peter has Jude as its reference point, and not vice-versa.  He says the author is almost certainly the brother of Jesus (Bauckham 14).

Enoch and the Giants

Even when Jude isn’t quoting 1 Enoch, he uses language from the text.  We should probably give a brief summary of Enoch’s argument: around 200 Watchers, seeing beautiful women, descended upon Mt Hermon and mated with them.  Their children were Giants and when those giants died, their disembodied spirits were demons

As Bauckham notes, Jude almost certainly believed this story (as did everyone, Jew and Christian, until the 3rd century).  And Enoch does have a cool passage: “Bind ‘As’el hand and foot, and cast him into the darkness: and make an opening in the desert, which is Daddu’el, and cast him therein” (1 Enoch 10:4-6).

But how can we know that Jude actually believed this stuff?  It seems we can because he likens Sodom and Gomorrah’s sin as sexual in nature, and links it back to the angels.  The comparison doesn’t work if they were only human dudes.

“Which practiced sexual immorality in the same way as the angels and hankered after strange flesh.”  Bauckham comments, “The second clause explains the first. As the angels fell because of their lust for women, so the Sodomites desired sexual relations with angels” (Bauckham 54).

Bauckham tables the sources from which Jude likely drew in verses 4-15.  While these aren’t Scripture, they formed the intellectual backdrop for Jude’s writings (45).  Jude believes in giants, Watchers, and sexual sin.
Concerning the debate between Satan and Michael in the Testament of Moses, Bauckham takes Michael’s reluctance to rebuke Satan not as wanting to show respect to Satan, but that Michael knew that he himself was under another’s authority and didn’t have the authority to pass judgment on Satan.   This contrasts with the false teachers who think they are above angels (given the Jewish and early Christian belief that the Angels passed on Torah to Israel), which makes them immune to the Law.
“Pray in the Spirit”: includes but not restricted to speaking in tongues (113).
2 Peter

Bauckham bucks the trend of both sides when it comes to Petrine authorship.  He doesn’t believe that Simon bar Jonah wrote the epistle. Yet neither does he think it is the pious fraud known as pseudepigrapha.  He maintains that it is part of the genre of a “testament.”

He places the dating of it between 75-100 AD.  This means a) either Peter couldn’t have written it if he was martyred at Rome or b) Peter wasn’t martyred at Rome.  With most of the tradition he opts for (a).

His argument against Petrine authorship is a bit stronger than “the language is different.” He notes on 3:4 that the author refers to the passing away of the generation of the fathers.  Who are the “fathers?” It can’t be the Old Testament fathers, for those promises always referred to the first coming. It would make no sense for the author to say the promises haven’t been fulfilled with regard to the “coming.”  It can only be the disciples, which would make it an odd statement for Peter to make.

It’s an argument worth considering.  I’m not fully convinced, though.

1:4: deification. Likens deification (becoming divine) not as absorption into the Godhead, or the erroneous teaching of Thomism where we mentally gaze upon a created similitude of the divine essence, but rather that we take on characteristics of the divine realm: immortality, incorruptibility, etc. This makes sense if we are ultimately going to judge and replace the fallen beney ha-elohim. 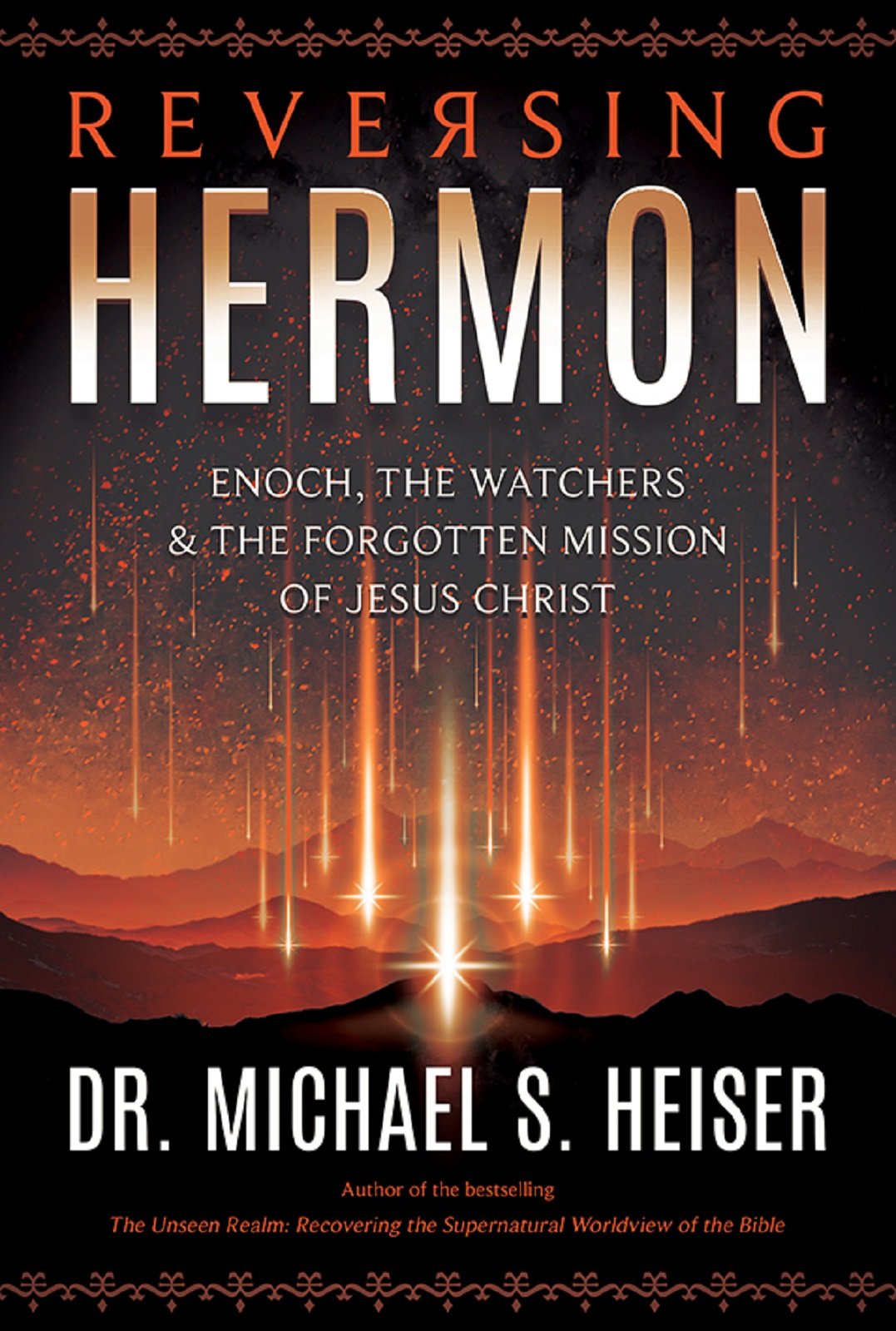 It’s hard to describe this book’s relation to Unseen Realm.  True, Unseen Realm is in a class by itself and few books are as good as it.  I guess you could say that Reversing Hermon is an “update” to Unseen Realm.  Should you read this book if you have read the other?  Absolutely. Some of the scholarship is updated (though it was never out of date).  And it covers new material.

He advances his now-familiar argument on why Genesis 6:1-4 must have a supernaturalist explanation (more on that below).  When Heiser comes to New Testament material, he conclusively shows that the New Testament writers understood the “Enochian worldview” and echoed it at regular intervals.

Assuming that the text of 1 Enoch probably didn’t come from pre-flood times, and granting that it is not Scripture, why is it important?  It’s important because it was part of the worldview of the apostles (and indeed, at least two apostles quoted it as authentic literature). Further, Enoch has material in it while absent from the OT, is present in Jude and 2 Peter (e.g., imprisoned angels, etc).

Heiser argues that “The Enochian version of the events of Genesis 6:1-4 preserves and transmits the original Mesopotamian context for the first four verses of the Flood account” (Heiser loc. 84).

Heiser notes the links between the Mesopotamian apkallu and the Fallen Watchers.

Drawing upon the scholarship of Amy Richter, Heiser notes “anti-Watcher” themes in the genealogy of Jesus (loc. 1244).  Each of the women in Jesus’s genealogy deal with some sort of illicit arts and beautification (Tamar and Ruth), sexual sin (Bathsheba), and Nephilim echoes (Rahab).

With Rahab she is in the land of the Nephilim, she marries Boaz, who was a Gibbor (Ruth 2:1).  Of course, Boaz wasn’t a giant, but given that gibbor is often translated as gigas, Matthew is creating mental links between the two (loc. 1377).  But there are more links: according to James 2:25, Rahab received messengers (angelous).

Bathsheba was married to Uriah, a gibbor (2 Sam. 23:39).  Of course, she is also called Bath-shua (1 Chr 3.5), therefore echoing the Enochic template of that scene.

An Analysis of Psalm 68

A surface reading of Eph 4.8 and Psalm 68.18 reveals a problem. Jesus is giving gifts and the Psalm says God receives gifts.  Heiser suggests we can remove some of the confusion by not reading this as Jesus leading captives free (which would be true in other contexts), but rather taking captives, per his storming of Bashan (loc. 1691).

Some of these are inspired by Dr Michael Heiser’s writings, though much of it came from my own working through both the Scriptures and tradition.  Our problem is that we are all students of Milton, whether we admit it or not.  An Enochian worldview, by contrast, sees how “angels” (more on that term later) function within the Divine Realm. 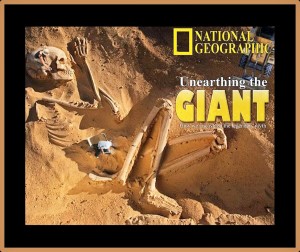 We say things like “we need a biblical worldview” (I used to say “supernatural,” but after talking with some guys on a Reformed online forum, I can’t take that for granted anymore), and we piously nod at the Bible when it says “angels are ministering servants,” but we really don’t let the Bible correct our understanding of Dante.

What Did Dante Say?

You already know this.  If I say “hell,” you think of a fiery underworld.  More to the point, you think there is a class of beings known as demons/devils/fallen angels.  They are either being tortured by fire or torturing others by fire (pop culture tradition isn’t too clear).

But there are some problems with this picture (though it did inspire good music).  The Bible contradicts it in various places.  If you hold that there is one class of beings called angels, which are subdivided into good and bad, with all of the latter in a subterranean realm (or if you are a bit more sophisticated, another dimension), then the following problems occur:

That’s enough for now.  These questions show that the pop worldview about demons is wrong.  Now for my own theses, drawn from Michael Heiser and Derek Gilbert.

1. Sons of God in Genesis 6/Psalm 82:Dt.32:8 refer to elohimic beings, not men.  I won’t argue that thesis at this point. I also think these are what Enoch called the Watchers (alluded to in Peter and Jude; mentioned in Daniel, though those Watchers are good).

2. Their offspring were the Nephilim.

3. Some church fathers and Philo said that the departed souls of the Nephilim were what we call “demons” today.  Maybe.  That might not be provable, but it does remove certain problems.

I am closely following Heiser’s analysis on issues like the Rephaim.

5.  Demons aren’t the same as fallen angels, rephaim, or nephilim.