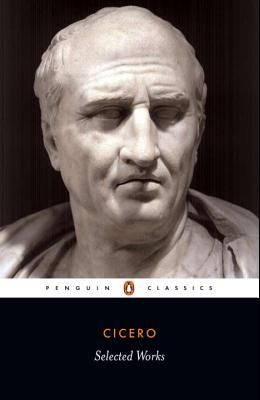 The selection of these works goes in order of ascending quality.  His “Against Verres” is an early snapshot of his rhetorical career.  His letters, while often whining in tone, are a remarkable glimpse into late Roman Republican life.  The real quality, however, are the two final works, “On Duties” and “On Old Age.”

“On Duties” is that work that college students should read in their ethics classes.  At my liberal arts college, ethics meant simply reading about “hard decisions” and then justifying which decision best fit with late modernity’s loose sexual mores.  Cicero, by contrast, actually helps you think through the problem.

Here is the problem: given that the Good exists, what do we do when what is good conflicts with what is advantageous?  Cicero’s answer is that any disagreement is only apparent, since nature and goodness cannot be at variance.

As a Stoic, his argument is that there “can be no advantage in what is not right” (III.II.8).  He then runs this template through several test cases. He defends property rights because violating these would cause the collapse of the human community, “the brotherhood of man.” This is the natural law, or nature’s rational principle.

Case study 1: Can a starving man take food from someone who was completely useless?  Robbery is unnatural, but if the case were such that your robbery rendered benefit to the community of men, then it isn’t wrong provided it is done for that reason.  Nature’s law coincides with the common interest, and the common interest ordains that the means of subsistence be transferred to the starving.

Case study 2: Can you steal from a tyrant?   Cicero’s answer is chillingly simple: there is nothing wrong in stealing from a man whom it is morally just to kill.

Another reason that the morally right cannot conflict with the advantageous is that doing wrong damages one’s soul.  Wrongdoing leads to personal degradation.

There are other case studies dealing with insider trading, etc. Cicero’s conclusion is balanced: “Holding [knowledge] back doesn’t always amount to concealment; but it does when you want people, for your own profit, to be kept in the dark about something which you know and would be useful for them to know” (180).

Why?  Nature is the source of law, and it is contrary to nature for one man to prey upon another’s ignorance.

Later he defines the four cardinal virtues as subdivisions of right.

This is a rather charming treatise on how to live out your older years. Cicero developed his memory by reciting everything he had learned each day.

His comments on the after-life, while wrong, are interesting in what educated Romans would have believed.  He argues that our souls came from heaven, and the earthy is alien to their divine nature (214). The soul functions at lightning speed

Even in translation, and even when I disagree with him, Cicero wrote with an easy calm.  I especially recommend his “On Duties” to every college student.