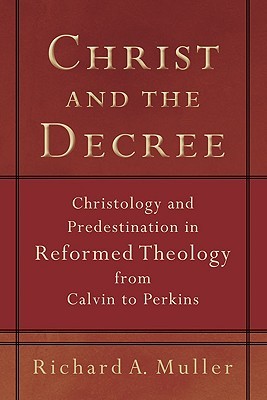 Richard Muller’s work begins on a promising note: he refuses to view election in any way apart from the Person of Christ, specifically regarding the role of the mediator. Part of the difficulty in this review is noting what is Muller’s own view and what is John Calvin’s. Assuming Muller wants to identify his position with Calvin’s, I will use “Muller” and “Calvin/Calvin’s contemporaries” interchangeably. One of the caricatures of Reformed theology is that it posits an angry Father making an arbitrary decision on who gets to go to hell and to heaven. Muller reconstructs Calvin’s work to show that Calvin spoke of election in the context of Christology; therefore, election and the saving work of Christ can never be separated. By the end of the review one will see how successful Muller was.

This review will examine the historical development of Reformed perspectives on predestination as they relate to a specifically Reformed approach to Christology. Also, whether or not the doctrine of unconditional election is true or false is independent of Muller’s historical thesis. If election is false, that in no way validates whether Muller’s reconstruction of these Reformers is true or false.

As to the Christology itself, Calvin distinguishes the Person of the Son from the Son as God, which leads to the Reformed doctrine of aseity and autotheos (Muller 29). Much of the book will hinge on the connections between aseity, autotheos, and extra calvinisticum. This leads to Calvin’s important doctrine of mediation, which is framed according to the Son’s two natures. Muller claims that Calvin’s Christology is a historical Christology that focuses on the covenant-keeping God who acts in history to save man. Yet, Muller claims this marks a genuine innovation. In fact, it is the covenant-keeping Christology that sets Calvin apart from the Eastern and Chalcedonian Christology (33). Presumably, the East is more interested in a Divine Person who assumes a human nature to himself, whereas Calvin is more interested in the mediator who acts in history to save his people.

The rest of Muller’s book tracing the development from Peter Martyr Vermigli to William Perkins documents how these writers viewed election “in Christ.” There is no such thing as a nude Deos absconditus who makes deals “behind the back” of the Son. Starting with Vermigli, we see an emphasis on grace as mediated (57), putting a Reformed slant on a very Roman Catholic doctrine and structure. One side-note related to this, and important for Muller’s thesis, is that election is mediated by Christ while reprobation is im-mediate (80). In other words, Christ actively saves the elect while no person actively damns the reprobate. Obviously, Muller is putting a very infralapsarian spin on the matter.

Calvin gives this specifically Antiochene Christology a more rigid structure. Starting with Calvin we see the office of mediator taking a more prominent role In other words, as Muller hints, “Office has replaced person” (180-181).

Muller’s book deserves high praise. He has done yeoman’s work synthesizing a large amount of material, the nature of which is prohibitive to the average layman.