Classic Reformed apologetics is making a comeback, and who better to serve as the focal point than B. B. Warfield? This is an accessible version of Riddlebarger’s dissertation on Warfield.

In a somewhat ironic fashion, the man today vilified for defending inerrancy was attacked in his own days for opening a Pandora’s Box. Theodore Letis called attention to this fact. Warfield’s inductive, scientific approach to textual criticism, including his endorsement of Westcott and Hort, was no different from a liberal.

Riddlebarger argues that your opinion of Warfield’s apologetic method depends on how favorable you are to Scottish Common Sense Realism.

For Warfield, apologetics is an offensive, rather than defensive, science. It is theological prolegomena. Indeed, Warfield doesn’t hold back on his language: apologetics will “reason its way to the dominion of the world” (review of Bavinck’s De Zekerheid des Geloofs). Following Thomas Reid, Warfield’s project would look something like this:

a) Man as imago dei has the capacity for knowledge. Faith is complete trust in Jesus Christ, “about whom one must possess objective knowledge.”
b) We must establish the grounds of faith by evidences.

Warfield’s focus is more on the resurrection than the proofs for God, which is also how the NT presents it. While such an approach might be probabilistic at points, Warfield applies the law of non-contradiction to Jesus’s claims, giving them an “absolute” character.

Warfield’s epistemology: He draws upon Calvin. Revelation provides the objectivee ground for our knowledge of God. The Internal testimony of the Holy Spirit provides the subjective ground. Faith is different from knowledge, not because the latter is “better,” but because the grounds of it is more direct. This lines up nicely with Warfield’s Scottish realism as “an element of trust is always present in our knowledge.”

“The Idea of Systematic Theology.” While much of this is standard prolegomena, Riddlebarger provides a nice graphic. 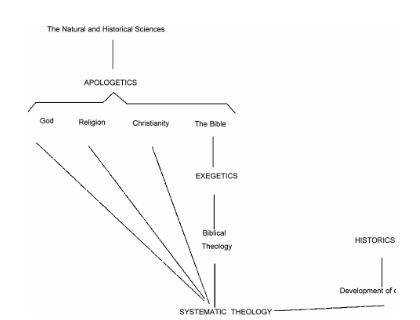 Concluding question: does common sense realism compromise Reformed theology? It’s not immediately clear how it does. Rogers/McKim say Warfield overlooked Calvin’s antipathy towards Aristotle and Thomas Aquinas. But it’s not immediately clear what Common Sense Realism has to do with either. Indeed, if you want to trace a genealogy of common sense realism, you won’t go to Thomas or Aristotle. Rather, you would find it in Reformed guys like Dick, Thomas Chalmers, and William Cunningham (and Charles Hodge and Dabney and Thornwell).

Riddlebarger draws upon Paul Helm to note several advantages that the Reformed thinker would have seen in Common Sense Realism
1) A ready reply to skepticism
2) Everyone uses the same faculties for testing truth.
3) It is compatible with Baconian methods of inductivism without the problems of pure empiricism.

Instead of labeling people “closet Arminian,” let’s see what the greatest Reformed theologian of all time, Francis Turretin, said about reason. Turretin affirms for reason a “ministerial” authority, not a magisterial one. Reason is an instrument of faith.

Warfield doesn’t disagree with Kuyper that sin colors one’s reason. The problem is that Kuyper had so absolutized the difference between Christian and non-Christian that communication was rendered (at least in theory) impossible.

Riddlebarger successfully defends Warfield from the charge that he was a “rationalist.” He was anything but, and that on certain levels. Warfield was much closer to an empiricist, which by definition rules out rationalism. Riddlebarger calls attention to Wafield’s indirect dependence on Thomas Reid, and if genealogical arguments are to be trusted, Warfield bypasses Thomas Aquinas and Aristotle and drinks from Reid