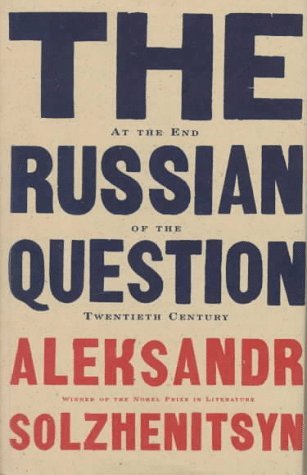 The title sounds like a socio-political analysis. Actually, it is a short history book. But upon closer inspection, it is more than that. Solzhenitsyn uses the medium of history to re-tell Russia’s story in a way to call the Russian people back to their spiritual heritage and also to warn Americans of the dangers that their own democratic liberalism offers. Written primarily for Russians, this book is a call for all. The specific question is simple: “Shall our people [Russians] be or not be” (106)? Solzhenitsyn raises points out the obvious double standard: patriotism and nationalism are good only when it is not Russian.

The main body of the book is a survey of the last five centuries of Russian history. Solzhenitsyn’s basic premise is that whenever Russia became imperialistic and sought other territories, the Russian people suffered and the country would lose prestige. Solzhenitsyn’s basic premise is correct, but it is not that simple. He is quick to point out the dangers of pan-Slavism, which makes criticism of him rather odd.  Solzhenitsyn is not a Russian nationalist, if by nationalism you mean what CNN wants you to mean.