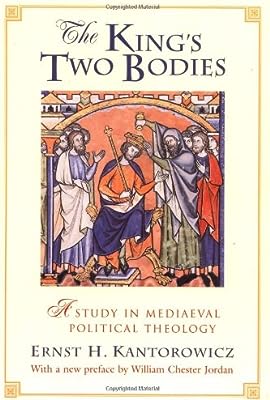 Ernst Kantorowicz analyzes the development in later medieval political thought by isolating one aspect of it:  the King’s Two Bodies.   By this phrase he means the conjunction of the king’s own natural body with that of the “body politic” (9).   It is not entirely clear exactly what “body politic” denotes, and Kantorowicz’s ambiguity is deliberate:  the phrase shifted in meaning throughout the Middle Ages.   It is Kantorowicz’s further claim that this shift in meaning had theological roots.

Kantorowicz argues, somewhat counter-intuitively, that “The King’s Two Bodies” is a monophysite construction—while purporting to be an analogy between the King and the divine, it actually takes the form of a heretical Christology (14-15; see also p.18).   The charge of monophysitism is somewhat difficult to follow, but Kantorowicz claims it resulted from the indifference (and inability) to properly distinguish the body of the mortal king from the body of his realm (p. 18).    As is evident, the medieval jurists were seeking to imitate their constructions of kingship from Christological truths.   That is nothing new, nor is there anything wrong with it.  The Eastern Romans already were doing that for hundreds of years.   The problem arose when other theological currents changed the way the Church in the West did Christology, and thus changed the way it did politics.

In the early middle ages Western Europe was similar to the Eastern Romans in terms of using Christology to shape kingship.  Both civilizations shared a common faith and used that common faith to understand politics.   They saw the King as imitator of Christ (47).  It should be noted, however, that the Eastern Romans did not use the phrase “King’s Two Bodies” as extensively (at all?) as the West did.  While the phrase wasn’t heretical, per se, it was always attended by many possible dangers.  In either case, both sides saw the King as the representative, not of God the Father, but of Christ.  This reflects the ancient reading of the Old Testament as a revelation of God the Son.   A moment’s meditation on this point will make it obvious:  political theologies are almost always based on the Old Testament simply because it deals with politics more than does the New Testament.  Therefore, one’s reading of the Old Testament will shape the way one does political theology.

The West’s grammar changed, though.   Previously, kingship was done in the context of liturgy.  The King represented Christ’s rule in a mystical way.  He was anointed with oil for the sake of the realm.   He was, in short, an ikon of popular piety.

The watershed mark demonstrating the transition best is the reign of Otto II, and the best way to illustrate this difference is in the ikonography surrounding Otto.  Otto is important for he represents the intersection between the Byzantine East and Frankish West, including the best and worst elements of both.   Kantorowicz contrasts two ikonographic paintings which portray rulers:  the Aachen miniature over against the Reichenau painting of Otto.   The former portrays the Charlemagnic king as the representative of God the Father whereas the Reichenau painting places Otto in the foreground of a Byzantine halo, suggesting he represents Christ (77).

The above is an important point and I suspect the larger part of it is lost upon Kantorowicz.  This ikonography reflects a shift in theology, which probably reflects a shift in the way sacred texts are read.  It was mentioned earlier that the Old Testament was now read, no longer as a revelation of God the Son, but of God the Father.   One could probably take it a step further—it was seen as a revelation of God-in-general.

In many ways it is the concept of a “Mystical Body” that contributed to the secularization of Western political thought.   One must avoid, however, overly simplistic reductions regarding the phrase.  The phrase “Mystical Body” originally connoted the interplay between the Eucharist, the body born of the Virgin Mary, and the Church itself.   While the phrase is not Pauline, if left at this stage there is no problem.   As Kantorowicz, drawing upon the work of Henri Cardinal de Lubac, notes, the distinctions between the two bodies hardened into oppositions.   Therefore, the body of Christ per the Church was separated from the body of Christ the Son of God.  While small at first, this opened the door for a secularization of concepts.

The King as Corporation

One suspects that the idea of the “corporation” arrived in the West coterminous with the sharpening of the “King’s Two Bodies.”  Indeed, even if not chronologically accurate, it is logically consistent.  Jurists were puzzled over the problem of whether the king’s other body—his realm—died when he died.  The short answer to this problem was that the king’s other body did not die.  The people were in-corporated into this body and outlived the king.  The canon lawyers coined a phrase for this:  dignitas non moritur—the dignity does not die.

One cannot avoid noticing throughout this work, and if the argument holds then throughout Western history, a progression of concepts regarding political theology.    Like its Byzantine cousin, Western political theology began with liturgical roots (59).  After the Ottonian period, these liturgical roots were translated into secular terms (115).  Therefore, when the King is called a “corpus mysticum,” this cannot be interpreted in early liturgical Christian categories.  Rather, it can only reflect the ongoing secularization.   Because of the hardening of “the King’s two bodies,” jurists had to account for the fact that the second body, the realm, did not die[i], and they could only do this by introducing the idea of the corporation.  Therefore, one can trace the movement of Western political theology along the following line:

This book is a genealogy of political theology.  It traces the rhythm of Western politics through the lens of a highly disputed phrase.   Further, it traces the nuances later attributed to that phrase, and the earth-shattering consequences.  Our only regret is that this was the only book of its kind that Kantorowicz had written.

There are some difficulties with the book, though.   Kantorowicz does not always identify his main point in each chapter, or he might wait until some random moment in the middle of the chapter before he informs the reader of his argument.   Further, there are some portions of the book which do not seem relevant at all (e.g., his extended discussion on medieval English fiscal rights).   On top of all of this is the rather dense style in which he wrote, coupled with the numerous (usually un-translated) sentences and paragraphs in Latin.  One suspects that many of these phrases are indeed central to his main argument, but if one’s grasp of Latin is not on a post-graduate level, the argument will be lost on the reader.