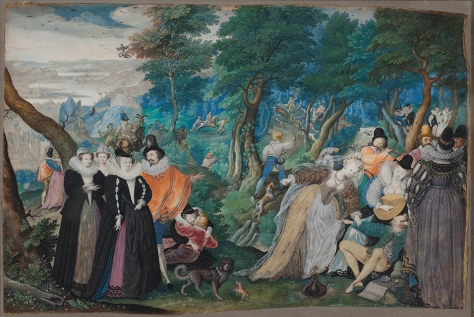 Continuing his allegory of the moral virtues, Spenser tells of the she-knight Britomart, who embodies Chastity.

Florimell: Her story arc just shot out there.  It never returned home.

The point of allegory isn’t to make a list of equations where “x = y.” Britomart isn’t simply Chastity.  Rather, her pursuit of chastity should invoke in you a feeling of what chaste love is like.

The narrative: Britomart finds herself in Malacastia’s Castle.  While she avoids seduction, she is wounded (for she let her armour down).  As she leaves Merlin tells her the Arthurian story.

In Canto Three there is yet another genealogical telling of the Arthurian story.  This is more for Britomart to understand Artegall’s lineage. There is a similar retelling in Book Two.

Cantos 6-8 tell of various dealings with Satyrane, Florimell, the Giantess, etc.  This is probably the hardest part of the book, since I think Spenser momentarily lost control of his narrative.  It does come back, though.

Some scenes are written with pure imagic power.  The story arc concerning Malbecco, especially his sad end, is near perfect.

The book ends on a similar note as Book II. 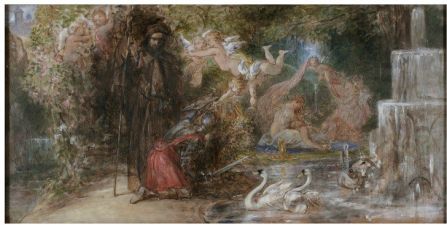 In Book II the knights destroy the sensual Bower of Bliss.  Bower of Bliss represented raw lust. The enemy in this castle is a bit more refined (and harder to destroy).  The sorcerer performs a Masque and the players come out in twos.  Each pair represents–for lack of a better phrase–the emotions that come with unchastity.  By unchastity I don’t simply mean sexual immorality, but that “lack of wholeness” and confusion that comes when you blur the boundaries in proper behavior.  It’s psychology at its finest.