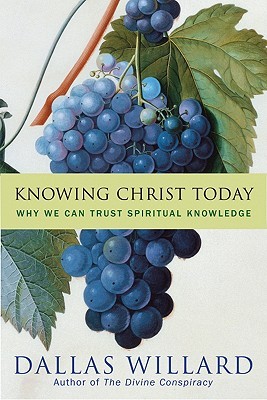 Thesis: A life of steadfast discipleship to Jesus Christ can be supported only upon assured knowledge of how things are, of the realities in terms of which that life is lived (Willard 7). Correct knowledge gives us secure access to reality.

Interplay between faith and knowledge

What is it to possess knowledge? “We have knowledge of something when we are representing it….as it actually is, on an appropriate basis of thought and experience” (15).

Faith is contrasted with sight, not true knowledge. Faith is always exercised “in an environment of knowledge and is inseparable from it” (20).

Exactly How We Perish for Lack of Knowledge

Sub-thesis: People perish for lack of knowledge because only knowledge permits assured access to reality” (39). While some are saying that “worldview” talk is now dated, it is still inevitable. Willard calls it a “biological necessity for human beings, because we act, whether consciously or not, with reference to a whole (a ‘world’)” (43).

One way we perish is by idolatry. It is a mistake about reality, in that we assign powers to an object that it does not have.

The rest of this chapter is a summary of Renovation of the Heart and The Divine Conspiracy.

Can We Know That God Exists?

Willard gives a simplified version of the Kalam Cosmological argument.

(1) The universe had a beginning (evidence from Big Bang, background radiation, impossibility of traversing an actual infinite, etc.)

(2) It was either (p) produced by nothing or by (q) something that is not physical.

(4) The causal closure principle of the universe is false since it cannot explain the cause of the physical universe (see [1]).

(5) There must be a first member in the causal series.

(6) This cause must have a will since he/it willed to create.

(7) Therefore, the causal system is not merely causal.

The Miraculous, and Christ’s Presence in the World

Knowledge of Christ in the Spiritual Life

Here Willard summarizes his work on spiritual disciplines. We are cultivating a “constant receptivity” to the presence of Jesus (156). This list is not exhaustive. We do so by:

Knowledge of Christ and Christian Pluralism

What would a Christian pluralism look like? Willard defines it as “a pluralism based upon the generosity and justice of the God revealed in Christ” (170). This raises a problem: if by knowledge of Christ we have secured access to reality, then it seems that others are wrong. Willard heads off that line of reasoning by noting we shouldn’t confuse belief with behavior. I can believe you are wrong and still be a decent human being.

In any case, there is a logical exclusivity about knowledge in general. Pluralism as an ideal is false and unworkable, since various religious traditions make exclusive claims. What is valuable in pluralism, however, is having a proper and friendly attitude towards the so-called “Other.”

A Christian take on true pluralism (!) would imply something like the following:

(1) Agape love for everyone.

(2) God will treat everyone justly.

(3) Willard is *not* saying people from other religions *will* be saved apart from Christ.

(4) Yet, God probably won’t cackle maniacally as he watches people on the barbeque pit.

My only real concern is Willard’s exegesis of “no other name.” He says it is in the context of meaning “no other access to God’s kingdom power–resulting in the previous miracle–except through Jesus’ name.” I certainly believe that is a true proposition. I just don’t see how it changes the original meaning.

This book is a good snapshot on Christian epistemology. It is, however, not a text on epistemology. Willard shows the importance of Christianity as a knowledge-tradition and that we have access to it. But he doesn’t deal with the basic problems of epistemology.

This book isn’t as good as Renovation of the Heart, but it is better than Divine Conspiracy. It’s on par with Hearing God