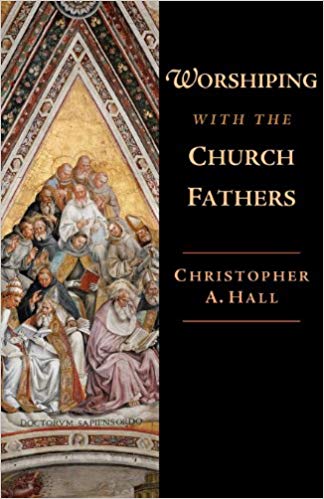 The first 3rd of the book deals with sacraments and the structure of worship, if only briefly per the latter. If you’ve read much into the history of the sacraments, there isn’t much here that is new. The rest of the book deals with prayer, and it is one of the best treatments on prayer I’ve ever read. Most manuals on prayer usually focus on “You need to pray more” or “Communion with God” or something like that. No doubt true. It is the fathers, however, who give you practical guidelines on how to pray.

Order of service. The key witnesses are Justin and Tertullian. We have to be careful with Tertullian, since he prescribes “sisters” exhorting and prophecying. The “president” of the assembly gives an exhortation, followed by a group prayer. Eucharist was weekly.

Oil was used to chrism the baptized (n55).

Relationship between baptism and regeneration: Later fathers such as Gregory of Nyssa assigned it an almost medicinal function, though not by the nature of water itself but by the working of God.

While the fathers hated gnosticism, as we all must, they also lived deeply ascetical lives. This wasn’t a contradiction, for the athletic-like control of the body allowed them to fully participate in the spiritual realities to which matter pointed.

So what happens with the elements? The fathers don’t have anything so refined as transubstantiation, though their language is strongly realist. The key point is that the Eucharist isn’t a repetition of the cross, it is rather a remembrance in the sense that the realities come rushing toward us. This is accomplished by the epiklesis.

Ignatius of Antioch encourages the Ephesians to gather often for the Supper.

Hall doesn’t specifically address it, but his comments on Cyril of Jerusalem show that the elements were received in both kinds. You held out your hands, the right and left hands forming a cup in which to receive the King.

Gregory of Nazianzus’s sister, Gorgonia, couldn’t be healed by the physicians, so she fell down before the altar at midnight. Gorgonia took the leftover Eucharist and applied it to her body and was healed.

Prayer flows from our dispositions–our habituated thoughts, words, and actions. This is why praying the psalms is important. Athanasius argued that when we read and chant the psalms, those experiences become our own. Therefore, when we pray the psalms daily (specifically, various cycles of psalms), we aren’t engaged in vain repetition. It is rhythm for our life.

There is a connection between continual prayer and bodily behavior. Continual prayer requires an assault on our passions, which the fathers took to mean something like but stronger than “bad habits.” Rather, it is “a conglomerate of obsessive emotions, attitudes, and desires.” They are “logismoi” or “dialogismoi,” little maggot-eggs from which evil will spring. Combine these buzzing thoughts with the power of memory, and it is hard to enter into quiet, continual prayer.

The physicality of prayer ties in with what scientists call the “plasticity” of the nervous system. This is why habit-forming practices are so important and even inevitable. As to the how or “what” of prayer, Abba Isaac recommends Paul’s advice in Phil. 4:6-7.

Supplication arises from our sorrow over sin. Intercession is woven by our love for others. Thanksgiving requires a long memory. Sometimes we move into wordless, almost fiery prayer. This is given by God.

Abba Isaac recommends Psalm 70:1 as the key verse to cry out at all moments of the day, whether in adversity or prosperity.

Antony didn’t know what we moderns know of neuroplasticity, but he had the same idea. Body and soul aren’t the same thing, but they are intimately related to each other. As Hall notes, “Antony habituated his body to labor that maintained the soul’s strength.” Antony’s ascetic labors lasted at least 35 years. Hall’s prose here is simply lovely.

And the stories about Antony are really neat.  His body was neither gaunt nor fat when he emerged from the fortress.

I strongly recommend this book in Hall’s series of the Church Fathers.

2 thoughts on “Worshiping with the Church Fathers (Christopher Hall)”