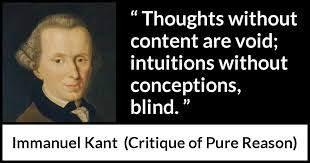 Kant is neither fun nor easy to read, but he can be read if one takes notes. And he should be read by lay philosophers as he represents an important (if not always benign) moment in Western culture. The following is a woefully bare review of Kant but it should alert the reader to Kant’s “key moves.” I don’t normally do reviews by defining terms but I think it would be helpful in this case.

Our knowledge begins with experience (I. B1). In the order of time we have no knowledge antecedent to experience. But we do have certain modes of a priori knowledge. This would include necessary and universal propositions.

Key Terms:
Pure reason: that which contains the principles whereby we know anything absolutely
Transcendental reason: not so much the objects of our knowledge, but the mode of knowledge.
Transcendental Aesthetic: isolates everything about sensation, so that all is left is empirical intuition
space: Our mind represents objects as “outside of us,” and we call this “space.” Here Kant exposits an “inner/outer” dialectic.
Intuition: the representation of appearance (A 42).
Apperception: the simple representation of the “I” Self-consciousness.

Kant denies, pace Berkeley, that objects are illusions. The object is always a given, but the relation between the knowing Subject and the object is not a given (B69).

transcendental analytic: that part of logic which deals with the elements of pure knowledge yielded by understanding (B86).
Noumenon = object of nonsensible intuition. It serves to limit the objective validity of sensible knowledge.
Matter = a species of representations (intuition) that relate perceptions to space. Space is conditioned within us. External objects are mere appearances.

These terms should allow the reader to navigate Kant. As to his conclusions, most will chafe at his defining matter as a species of representations, but on the other hand saying “matter” is flux is somewhat accurate. Further, his idea of God/morality/soul/noumenon as limiting concept makes sense only within a unique moment in Western history. Nietzsche and Hegel would later make short work of this argument.

Kant argued that A transcendental aesthetic isolates everything about sensation, so that all is left is empirical intuition; however, as Hegel pointed out, nothing exists apart from relations.

I won’t get into Kant’s antinomies.  I never found them persuasive and few skeptics today understand them (at least on the street level).

One thought on “Kant: Critique of Pure Reason”