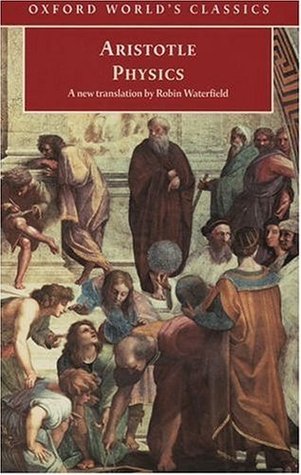 While I am normally hostile to Hellenism, I’ll give Aristotle credit on this point: he was a fairly good communicator.  He also set the stage for later scholastic thought (for better or worse).

Substance is not a predicate.  An attribute is that which belongs to the subject (186 b20).

“Being itself.”  Substance could mean:

“The form is indeed the nature rather than the matter”

Cause:  that out of which a thing comes to be

Nature–defined as the principle of motion and change.  Motion is the fulfilment of what exists potentially (201 a10). It appears he rejects the idea of a transcendent infinite because there is “no such sensible body” (205 b30).

Dealing with the infinite, Aristotle notes “Nothing is complete which has no end” (207 a14). This rules out Christian theism, for God has no limit yet he is complete and perfect. Aristotle’s discussion on potential infinity, while since surpassed by Cantors, is important for his own time.  Further, the infinite, such as it is, is contained (24).

What is a container?  The form is that which contains. A place is the boundary between the body and the container (211 b20). This contact creates an organic union “when both become actually one” (213 a9).  This is the false view that Thomas Torrance so devastatingly refuted.

Time is a measure of motion and of being moved (221a). Aristotle says that all motion takes place “during a time” (227 b25).  Just curious: is there motion in heaven? Heaven’s outside of time. What would it be like to exist in a realm that has neither motion nor time?  Contrast that with the Hebrew prophets. I think that is what Aristotle is saying. He notes that “it is impossible for a thing to undergo a finite motion in an infinite time, since time and motion are correlative.  In other words, the motion will “max out” the time. Aristotle just rejected the Christian view of heaven, whether biblical or even Platonic (237 b25).

Key argument: everything that is in motion must be moved by something else (242 a17). You can see the later arguments for the existence of God.  Something unmoved must already be in place to get the motion going. Book VIII has his famous line of the unmoved mover (260 a19). While I can grant Aristotle’s point that there is an eternal existent, we have no reason to think that it (no need to use personal pronouns) cares for you or would bother to reveal itself by speaking.