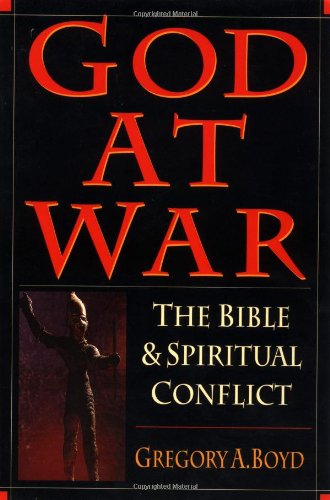 Boyd, Greg.  God at War: The Bible & Spiritual Conflict. Downers Grove, IL: InterVarsityPress, 1997.
If I were an Arminian or a Molinist, how would I respond to Greg Boyd?  I begin the review that way because Boyd, like some hyper-Calvinists, thinks in a fundamentalistic fashion: you are either 100% committed to his view, or you are 100% committed to what the opposite view necessarily entails.  Missing is nuance.  This is rather frustrating because much of the book is quite excellent and groundbreaking when it comes to spiritual warfare.  On the other hand, Boyd’s extreme way of phrasing the arguments makes for fairly easy reading.
Boyd advocates a “Warfare Worldview” model, which sees much (or all?  He isn’t really clear on this point) of the evil in the world as a result of demonic activities.  At least on one level that’s hard to argue against.  Entities in the spiritual world have free agency and hinder God’s purposes (or try to).  A case in point is Daniel 10.  The danger is that Boyd seems to pay a near fatal price:  by framing God’s sovereignty as a puppetmaster, and rejecting it, we come very close to having a God who really can’t do all that much.  That’s somewhat ironic for Boyd’s worldview, since if God can’t control the future, it’s not clear whether he will win the battle.
His first chapter examines various approaches to the “problem of evil.”  He notes the Bible never really deals with it (God never answers any of Job’s questions).  Boyd argues that to the degree we chalk up evil to some mysterious working of an abstract God’s inscrutable will, to that degree we cannot account for the actions of angels and demons on the world. Boyd asks: “Does this omnipotence necessarily entail that God is all-controlling” (Boyd 41)?  It depends.  What is meant by “all-controlling?”  That’s the problem.  Even Calvinist traditions affirms human choice of some sort and that God works through secondary causes.
Boyd’s argument is that we are more likely to find a “why” for the existence of evil in the free actions of human and demonic entities that simply chalking it up to Providence.  I agree, but I think he comes close to negating Providence altogether.  Notwithstanding, Boyd points out that a “warfare worldview” mentality didn’t make much sense in an Enlightenment world–whether conservative Enlightenment or French unbelief.  Such a worldview believes in the reality of spirits and non-physical causes.  Indeed, pace Kant, it posits the “world-in-between.” (Which, one suspects, is why Kantian thought doesn’t have a place for angels.  Are angels phenomenal or noumenal entities?  They are neither).
If God is unmoved essence, then the warfare language of the Old Testament is rather odd, if not downright blasphemous.  And such a Hellenistic mindset is at odds with modern understandings of the universe, where events are more fundamental than static essences (68).
God’s main enemies in the early OT were Yamm, Rahab, and Leviathan. He was at war on the water. Boyd rehashes the standard cosmic creation/warfare motifs of the ANE.  I’m going to skip all that in the review.  Boyd, though he has since abandoned this view, held to a day-age/gap theory view where creation was created before Gen. 1:2, allowing him to see the tehom as analogous to Tiamat.
I’m not persuaded of that, but he does have a point that Genesis 1-2 can’t be exhaustive, for it says nothing of the fall of Satan and/or other angels/Watchers.
Psalm 74 depicts Yahweh’s battle with the Caananite god Yamm, whom Job noted had a guarding aspect (Job 7:12).
The monotheism of the OT didn’t rule out sub-beings who were clearly not humans.  Call them angels, if you want to (though that isn’t strictly accurate).  We see this in the divine council (1 Kgs 22:20; Jeremiah 23:18).  This view posits Yahweh as a personal agent who communicates and hears speech.

Most likely refers to the fallen Watchers theme (262).  The NT usually refers to deceased humans (at least in an unqualified way) as psyche, not pneumata.  Pneumata usually refers to nonhuman spiritual beings.  Secondly, this is in the context of Noachian judgment.  If it is merely deceased humans, then why limit it to the flood?
Contra Walter Wink:  Wink thinks these powers are “the inner aspect of material or tangible manifestations of power” (quoted in Boyd 273).  There are some major problems with this, though.  Paul almost certainly thinks of personal agents. Further, he sees these powers as engaged in personal activity (Eph 2:2).
Boyd says Satan is Abaddon or Apollyon of Revelation 9 (277).  I don’t think so.
In terms of textual scholarship, the book is top notch.  The endnotes are a feast.  We cringe at the open theist aspects of the book and wish he hadn’t written the first chapter.
Advertisement