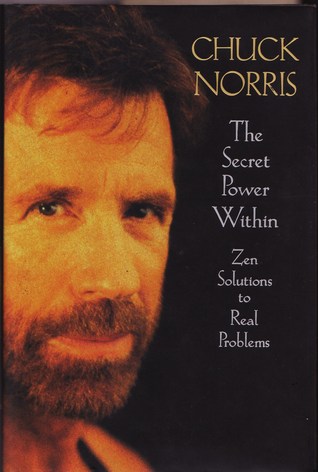 This is the early primer to his later autobiography.  The subtitle sounds goofy, I grant you, and Asian purists would probably (rightly) say that Chuck still doesn’t understand Zen.  Fine. The book as it is, though, is quite good.

Zen is when you gain knowledge through intuition, that lightning strike moment.  Sure, some use it for pagan purposes, but we’ve all had that ‘aha’ moment.

Is Zen Eastern magick that will lead the Christian down pagan paths?  No. It’s intuition. It’s following the path of intuition, a path made possible by hundreds and thousands of hours of discipline.  Repetitions “create intuition, to make the mind or body able to flow without reflection or pause” (Norris 45).

“No one, not even a lover, looks at you as intensely and closely as someone who intends to knock you out in the ring” (41).

Breathing techniques: “during inhalation [imagine] a very silver thread….drawn in uninterruptedly through the nostrils and [flowing] down the spinal column, where it is held for a few seconds in the lower abdomen.  Three-quarters of the air is then exhaled gently through the mouth in a steady, concentrated, powerful, but relaxed, stream” (65).

Shadow Warriors:  Don’t be a spiritual ninja.  Ninja created chaos and won through misdirection.  Don’t be like that towards those you love (107).

What about ki (or chi)?  This does border on mysticism, so careful thought is required.  I don’t know about all the “life energy moving through the body,” but in terms of movement and breaking boards, it makes sense. When you break a board, visualize the attack through the board (129).