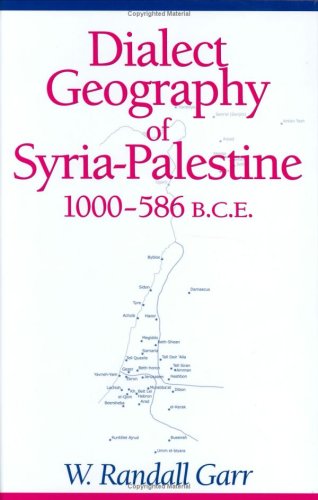 If languages are living things, then they might react like living creatures. Randall Garr surveys how languages in the Northwest Semitic family changed and stayed the same in different circumstances. Despite the flux inherent in the project, once the languages were written down, the changes slowed.

This book is written for the most extreme specialist (not I). It is designed for those whose dissertations are in Hebrew morphology (again, not I). However, there was one very interesting paragraph towards the end that illustrated the whole book. It was even from the Bible. In 2 Kings 18:26/Isaiah 36.11, it appeared that Hebrew and Old Aramaic were not mutually intelligible (circa 700 BC). However, three quarters of a century later, according to Jeremiah 27:3, Jeremiah’s speech was understood by people who knew standard Phoenecian, Ammonite, Edmoite, and Moabite (231).

Dialect geography: it traces individual linguistic features throughout a region (Garr 3). In other words, languages can slightly change due to human contact. More specifically, it maps local speech patterns (9).

Each chapter follows a very strict format, which makes for surprisingly easy reading (given the esoteric nature of the subject). For example, under “Phonology,” there is a section on the nun consonant. It lists how this was probably pronounced in Byblian, Standard Phoenecian, Aramaic, Samalian, Ammonite, Deir Alla, Moabite, Edomite, and Hebrew. It then summarizes the survey. In the case of the nun it usually assimilates to a following non-laryngeal consonant (43).