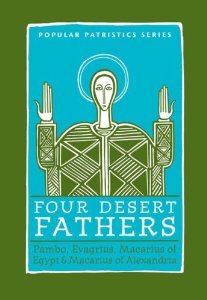 Unlike other volumes in these SVS series, this is not a collection of these fathers’ teachings.  It is rather 4 mini-biographies which includes their teachings. The translator/editor’s introductions are patristic gold mines.  While these fathers, for example, cannot simply be tagged with Origen’s teachings, they are understood in something of an Origenist framework, a framework which would have major repercussions on St John Chrysostom.

The sections on Evagrius and Macarius of Egypt were particularly good in explaining knowledge and spiritual warfare as it regards demons.  And while these fathers were great ascetics, they did acknowledge they made mistakes and sometimes took it too far.

Another strength is the footnotes.  Tim Vivian (the editor) connects the Desert Fathers’ teachings with key passages from The Life of Antony and Cassian’s Conferences.  That’s where the real gold lies.

In conclusion I highly recommend this volume.  It is a manual on spiritual warfare and many of the footnotes are correlated with other key monastic texts.