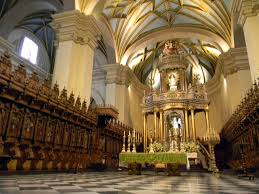 de Lubac outlines the origins and evolution of the “three-fold Body of Christ,” particularly as its known by the term “corpus mysticum,” the mystical body. It is tempting to read earlier phrases for the church—such as “the body of Christ”—back into the phrase “mystical body,” and define it that way. De Lubac warns against that move, since either the phrase “mystical body” (hereafter MB) is either rare in the Fathers or is not used in the later medieval sense. The threefold body is the Eucharist, the Church, and the historical body born of the Virgin Mary.

The problem with MB is its ambiguity. Pre-9th century writers used it as a helpful way to bring together many of the nuances in Eucharistic theology (de Lubac 79). However, intellectual moves would harden these nuances, place them in opposition with one another, and eventually see a body, or bodies of Christ, different from the one given to us in the Eucharist (162).

The Dialectic Breaks Down
Besides the relative scarcity of the term (MB) in the Fathers and early Middle Ages, it could still work as a Eucharistic term provided it was carefully defined. The problem arose when later theologians read current meanings back into the term. When that happened, the ambiguities in MB hardened into oppositions, and the oppositions broke the synthesis. De Lubac notes in the older sense of the word (mystery, mystical), the word conveys an action (49). The Eucharist brings unity to the church. This is contrasted with later developments: given the truth of Eucharistic realism (which no one would deny), the problem of “real presence” substituted itself for the real action accomplished in the Eucharist (164). No longer was the Eucharist seen as bringing unity to the church and uniting us to Christ, but it was seen as something for itself.

Why did Eucharist Realism bring about this problem? In one sense it did not. Rather, the nature of the terms were newly redefined, and this redefinition forced other equally valid definitions pertaining to the Eucharist into opposition with one another. As a result, theologians found themselves forced to choose between St Augustine and St Ambrose (and the rest of the Greek Church). The later medievals—just like today’s modernists—saw “real” as necessarily opposed to “mystery.” But for the ancients, mystery simply meant “conveyed an act” (49) and revealed the secrets of heaven (41). It did not mean “not-physical” or “not-real,” thus it did not see itself opposed to realism. However, men like Berengar and Ratramnus forced this opposition onto Augustinian texts. Their opponents, while rightly challenging their false doctrine, did not challenge the starting points of their presuppositions.

But what of the ancients that did speak of a “spiritual” body? Much like the word “mystical,” spiritual simply denoted supernatural or miraculous (141).

The End Result
The ambiguities hardened into oppositions, and the oppositions hardened into dialectics. Ancients saw the Eucharist as how the church was brought together into Christ. There could be no separation between the Eucharist, the Church, and the Historical Body for the ancients. But for the later medieval, per de Lubac’s gloss, it was hard to see how the separation would not have happened.

Conclusion
The book is a landmark book. It is a fresh discovery of older Patristic readings that were squeezed out by later Scholastic controversies. (A valuable project would be to investigate why de Lubac’s patristic project destroyed much of Vatican II liturgy afterwards, yet the Eastern Churches, using the same fathers, did not face that difficulty, at least not as acutely).

The book is not perfect, though. Like many of de Lubac’s books, the reader is usually unsure of de Lubac’s point. De Lubac rarely defines his thesis in clear terms, or if he does, it is only in passing. The book could have been one hundred pages shorter and much clearer had he removed a lot of extraneous material and sharpened his thesis. Secondly, and per the above point, it seems de Lubac’s method is to quote as many ancient texts as possible while avoiding integrating them into his argument. One feels like one is often reading a junior high term paper: the relevant sources are there, but it is difficult to see how they advance the argument. Other than that major problem, this book deserves a wide dissemination